So I truly had a unexpectedly beautiful 40th birthday. The past few months have been a tad challenging and initially I thought I’d just let the birthday go. 40 is a milestone but with all that was/is on my plate I didn’t think I’d be in a celebratory kind of mood. So I was playing ‘dead fish’ trying to ignore the impending day.

I am indeed blessed that my friends and family did not let me get away with ‘dead fish’. Two weeks before the date they informed me that it’s a day we’re going to celebrate.

So what transpired was the day started with a beautiful breakfast picnic on the beach with my two best friends. One of my besties made the most amazing pre-packed breakfasts for us. Also tucked into croissants and ham and cheese. We ignored the healthier food which we brought… muesli and yoghurt, and opted instead for champers and chocolate cupcakes. My other bestie bought balloons and spoilt me with a specially made 40th birthday mug, with symbolic gum balls and lollipops. And this could all happen on the beach because God gifted me with a lovely sunny day in the middle of Cape Town’s rainy season. This was the first part of a truly blessed day. 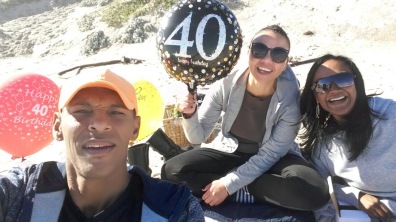 My brother also told me about two weeks before the birthday that he was going to make lunch reservations for the Femilyum on the day. So after breakfast, I had a quick pit stop at home to change clothes, and pick up the minions before heading to a wine farm in Stellenbosch to join the Femilyum for lunch. Here too I was just humbled being on the receiving end of So Much love. Indeed blessed. Thank you Jesus. 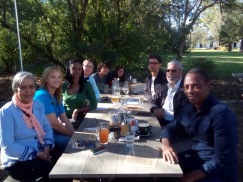 Finally back home, the minions and I agreed beforehand to have a movie night to end my birthday. So we made popcorn, snuggled up with blankies and pillows and watched the Breakfast Club. No better way to end the perfect birthday than with my two favourite peeps. 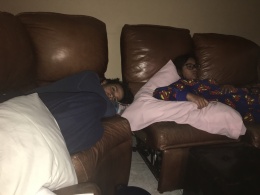 I am grateful too, for the gazillion messages and also birthday calls I received from friends, extended family, colleagues and even students. Humbled, touched by kindness and so appreciative it left me.

Reflecting on the day, besides the immense gratitude I feel, I am thankful that I was prompted (not given the choice really) to not do anything to celebrate my 40th birthday.

As we drove to the beach that morning, one of my besties shared shared a poignant thought with us. He said we don’t stop enough to celebrate the seemingly little things in our lives, because we are usually chasing an objective still far off – and celebrating smaller achievements seems too trivial to bother with. However in doing this – or rather not doing this we deny ourselves the ‘joy of the journey of life’. How true!

With to-do lists and lists of bills to pay that are as long as an arm, 1001 things we are still busy attending to or have not even started but we know we need to attend to, it’s easy to shrug off the little positives in lieu of the greater goal, but then we are not living. We lament over little failures but we do not acknowledge little victories.

‘Just Get On With It!’ is something I recently often told myself, a motto of sorts. It is as a mechanism to just cope and deal with my to-do lists and 1001 things. At the age of 40, my lesson from the day, is celebrating or at least acknowledging the small victories made along the way, is actually the critical and essential fuel that is needed for the journey. I might not reach my final destination or goal in the timeline I originally intended, but I will get there as long as I keep going. And I will not be able to sustain myself to the end, and reach my final goal without refuelling. I’m gonna try not to forget that.

Heads up Forties…. Hotness has just entered the building!