So the dire situation we find ourselves in in Cape Town at the moment is severe drought conditions. Consequently the municipality has imposed very strict water restrictions, meaning each person should use no more than 87 litres on average per day. That is intended for personal hygiene, drinking, cooking, washing clothes and any other household cleaning. 87 litres is not much.

An average shower uses 22 litres of water per minute. Thus a 2 minute shower is 44 liters which is slightly more than half my daily water ration. A toilet flush is 9 litres, so add 2 flushes and I’ve already used 62 litres! Then there all those seemingly small amounts that all add up. Let’s say 4 cups of coffee, washing the dishes, cooking rice or pasta, washing my hands two or three times a day. My 87 litres is used up in no time.

For the most part Capetonians have started realizing the severity and seriousness of the situation. Fortunately we’re a pretty resourceful bunch too. In my household, we reuse the water from washing dishes to water the plants. We shower with buckets in the shower, and then use that water to flush the toilet. Besides this, we subscribe to the commonly heard phrase, “If it’s yellow let it mellow, if it’s brown flush it down”, and we ask all our visitors to do the same. Similarly, when I visit my friends’ houses too – this is a common understanding – we’ve all adopted this water saving habit.

It surprises me that more people don’t subscribe to the same philosophy in the public restrooms that I’ve been to. The things is, we are all impacted by this drought – so in my opinion there is nothing embarrassing about not flushing the toilet in a public place if you’ve only wee’ed. It baffles me how selfish some people still are – so aware of themselves, that they would risk us all reaching Day Zero, as opposed to letting other people see their urine! Craziness. Thankfully, it’s only a handful of people who continue to be selfish and ignorant. I hope they’ll catch a wake up soon, stop being so proud and selfish and the hopefully with all our collective efforts we can avoid Day Zero. 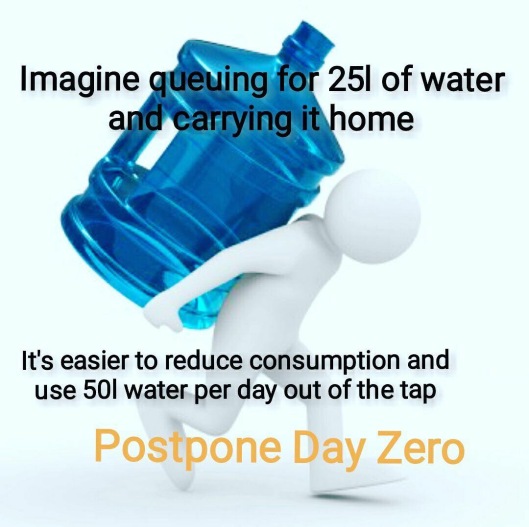 Day Zero is term that we more and more commonly hear being referred to. That’s the calculated day when our dams run completely dry. When that happens, every Capetonian will have to stand in a security guarded queue for a daily ration of 25 litres of water! To give you an idea of how much that is, see picture below of a 25 litre jerry can (or aspirator is the term used to refer to this container in a laboratory) positioned next to an ordinary sized coffee mug. Not much water uh… But that’s all we going to get per day for cleaning ourselves and homes, drinking, cooking and even flushing the toilet! That sounds insane but that is indeed our reality. Reality bites. 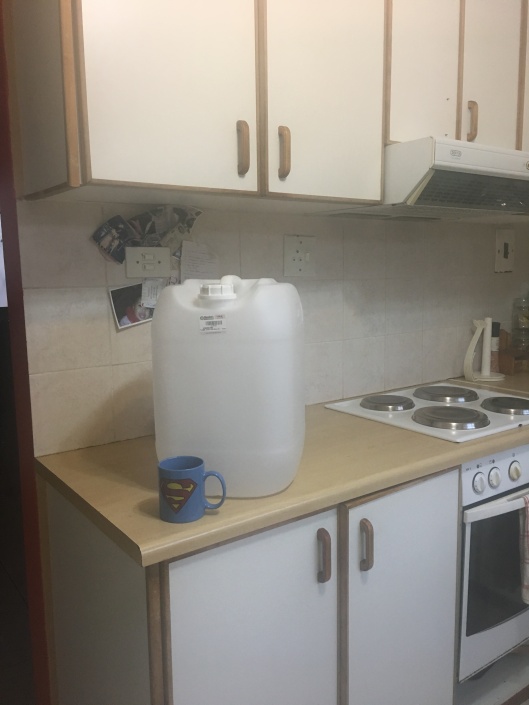 So currently no potable water may be used for cleaning anything outdoors such as a vehicle or even watering plants. A while ago I realised that I can collect the most water when it rains from my downpipes (from the gutters) because of the large surface area of the house’s roof. It’s much more effective that just leaving a container in the middle of the garden, hoping to catch some rain. Those containers are never filled to capacity with rain water – despite me trying that numerous times.

So until now I have been using two 25 litre buckets to catch the water from my downpipes when it rains. There’s three problems with that though. Problem one is each bucket just contains enough water to water all my pot plants once. So in a week without any rainfall then my plants suffer. Problem two is those buckets don’t have lids so if it’s a really hot day after the day it rained, the contents of one of those buckets evaporates before the water is even used. Problem three, on the day it rains, the 25 litre buckets overflow – meaning I could of actually harvested more water if the container was bigger….. hmmmmnnnn think think think.

Auspiciously, I’ve now come to a decision which is hopefully is going to be the solution. Today (with the help of my Dad…. Thank you Daddy), I purchased two 240 litre wheelie bins (the type usually used for household refuse). I opted for the unusual colours red and yellow to avoid my neighbours mistaking either of my new bins as their own! Anyway, these bright bins are now strategically placed to catch any rain water that falls on my roof. 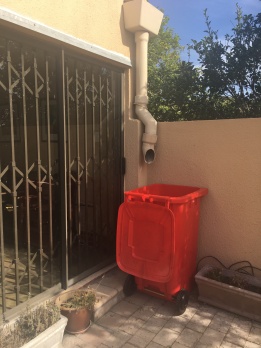 Keeping my fingers tightly crossed for rain sometime soon. My plants are feeling it – looking terribly sad. I believe a little rain has been forecast for Wednesday so I’m holding my breath hoping this new idea works. Who knows, with some luck I might catch enough water to top up my Jacuzzi! That’s another thing we not allowed to do…..top up pools and Jacuzzis. If my plan is successful however, take a guess where our Din Din club’s Christmas (Jacuzzi) party is going to be…..