So last night we had a murder mystery dinner party at our house. What an interesting affair.

Taste testing the punch before the dinner!

Spoiler Alert- if you plan to ever play The Masked Massacre by bepartofthemystery.com rather ask me about it person, as opposed to reading the rest of this blog entry.

We were 10 suspects including a ‘nosy parker’ society journalist, a ‘coke addict’ CEO, an ‘eccentric’ fashion designer and ‘crooked’ investment banker. Josh obliged by playing our private detective, Inspector Richard. 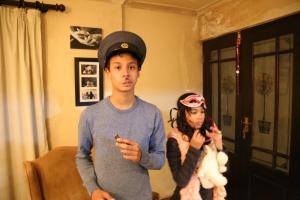 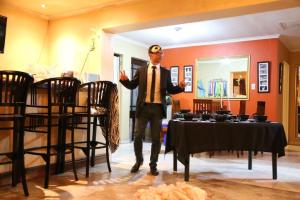 Over the duration of the three course meal, three sets of clues are given to the group of suspects with evidence about the murders, such as the coroner’s report or police report of the murder scene.

The rules of the game state that no one is allowed to lie except for the murderer. So if someone asks you a direct question one must answer honestly, unless of course you’re the murderer. Suspects may however embellish the truth. It makes for more challenging for the others and a more fun experience. At the end of the three course meal, all suspects should state who they think the murderer is and only after the final accusations the murderer is revealed by the host or inspector. So the rules say… 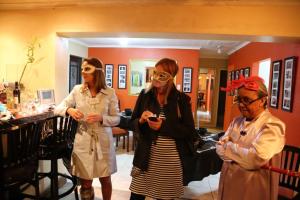 The rules also say that the murderer is not allowed to confess before this point, but my Femilyum is special. Fortunately our game had two murderers, so when my mom confessed to being the murderer before it was actually time to confess, we could go on playing.

Considering the context, it’s rather funny – just proves my mom could never be a hard core killer. It seems she felt guilty about killing an imaginary person, so just a little bit of badgering from the ‘nosy parker’ society journalist (aka my friend Ronel) had her confessing before we could even start dessert!

And then, as we were about to reveal the solution in the midst of everyone making final accusations Josh, …sorry I mean Inspector Richard thought he was asked who he thought the second murderer was so he casually blurted the solution out. 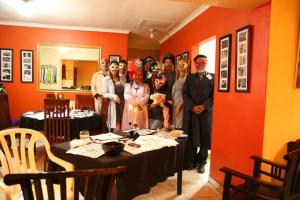 A rather suspicious looking lot

But what our game lacked in suspense (3/10 we scored in that department), we made up for in spirit (scored a whopping 11/10 for that!). Everyone put effort into their outfits and looked the part. Despite none of us having partook in such a dinner before but we certainly got into it as the evening progressed.

Tonight when the parentals popped around at my place and we did a bit of an autopsy (cough cough, every pun intended), we already decided toward the end of the year over festive season we must have another such dinner. Since we South African, heck we could even have it over a braai!  Fun times. Family memories 💣🔫🔪💉💵  Can’t wait till we do it again!

Well I reckon it was a success. I must still capture the data from the feedback questionnaires but in general I got really good feedback from the participants. I enjoyed it, and the positive responses that I received inspires me to prepare some more student workshops. Happiness. 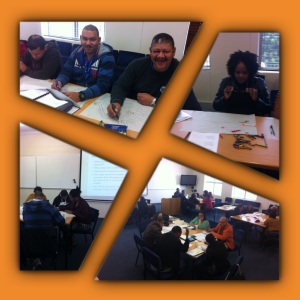 My tremendous thanks goes to my fellow supervisors (and my D. Tech classmates!) who supported the workshop. Olaf van Renen, You Rock!, and the two most beautiful ladies Lucrecia Valentine and Des Jaftha.

And it didn’t just sting a bit. It stung like a Mo-Fo.

For this blog to be an accurate reflection of the journey towards a doctoral degree, I think that I shouldn’t just tell the happy stories on the journey. I have to tell you that I was embarrassed and annoyed and wounded and then sad. But today I got up again, because gosh darn it, I wanna be a doctor.

Truth be told it probably wasn’t so bad. It looked a great deal better that what my M. Tech corrections looked like. I remember coming home on days when Andre Bester handed me the document that had came back from Prof Watkins. Those first few feedback sessions in the initial stages of writing the M, I remember looking at it and I felt like Prof Watkins thrashed me solid. The red marks with comment scrawled over my work. I remember feeling incompetent and worthless.

I pride myself being an independent woman so there are few occasions when I’ll admit that really, really wished I had a boyfriend to hold me and comfort me, but I have no absolutely problem telling that world, that on those days I DID wish I had someone to comfort me and tell me “chin up babe”.

But now I work with my new Prof, Prof Moll. He isn’t brutal as Watkins. I am also looking forward to working with him. I’ve already said thank you to him for the feedback, although in my head I was thinking ‘huh?’. At least Prof Moll doesn’t use red pen. I know I have so much to learn from him. The time has come to be humble, put my head down and just do the necessary.

Ridiculous words that I just made up now, but all for good reason.

Exhaustarated because I stayed up till 2:30 this morning finishing the preparation and PowerPoint presentation for a workshop that I am presenting on Research Design and Methodology on Saturday. I desperately wanted to just finish it, so I just kept chipping at it.

I literally couldn’t bear to shut the PC down at about 11pm last night when I thought I was almost done, so I continued and before I knew it, it was already 2:30. I am really happy with the finished product:) So so very happy. No, I am completely stoked, thrilled AMPED and so in my noppies dude.

Exciterated because I compared “Putting a research project together” to a visit to “Build-a-Bear”. Like the Build-a-Bear shop, all the elements are available to select from. It is up to the owner of the research project/bear to select those element that best suit them/the project. I took my daughter to Build-a-Bear for her birthday a few years ago and she designed her own teddy bear from scratch. First choose its fur, then she stuffed it, then put a stuffed heart in it, then clothed it and was issued a birth certificate for Princess Sarah.

Many of us do the same for our research, don’t we? Like Micaiah’s ‘Princess Sarah’, my ‘Lean Six Sigma Approach to the Selenium Analysis Process’ was a personal exercise……Uhmmm gosh. Did I just type that? eyes rolling – Maybe I need a life, as I typed that I felt sorry for myself.

Anyway, Still, research tickles my fancy. I’ve include three activities in the workshop – two individual reflective activities and one group activity. All I need to do now is find a few articles on data collection methodologies for the students to examine in the group activity. And also of course make arrangements for a flip chart, some coloured markers and some tea and cookies for the tea break. Fun up ahead.

I hope it goes well. I’m having this workshop with B. Tech students but it’s equally relevant to M. Tech students. So if it goes well, this workshop will be a pilot for a M. Tech workshop. The spin-off effect for me is the more I present on research design and facilitate sessions on it, the more familiar I become with a broad range of research concepts. Learning is amazing! I love it, love it, love it!

If anyone wants a copy, inbox me!  sharing is caring…..

About two weeks ago the minions and I visited the heart transplant museum at Groote Schuur Hospital, and what a life changing event…literally. For starters, as an immediate result of our visit, we have all three registered to be organ donors.

I urge Every South African to do themselves a favour and pay the museum a visit. I sincerely promise you, that you will come away feeling immensely proud to be South African. And for every Non-South African and South African, alike, you will come away with an amazing story of one man’s courage and determination in the face of adversity, a story about the unrelenting human spirit and our capacity to overcome, a reminder that after hard work and tenacity there are well deserved acknowledgements that came with accomplishments. Chris Barnard is an inspiration. His life made a difference.

Before our visit I really didn’t think much of the man. Sure, he performed the first heart transplant and what not, something very noteworthy yeah of course yeah- but until that morning I never realised the extent of the  sacrifices he made and what it entailed. Our visit gave me insight into his life and allowed me to try and imagine what it must of been to be in his shoes. He was the underdog and a risk taker. He finished a PhD degree that should have taken six years in two years – Respect!. Then, there were also no guarantees that any of his efforts would pay off, and yet he persisted for years…because he felt passionate about his work. And the time arrived, when totally unexpected by the rest of the world, in the wee hours one December morning in unsophisticated Africa, he performed the historical operation that forced the world to look up, and reminded them, don’t underestimate the underdog. Sometimes, that underdog will surprise you.

However, the thing that I admire the most about Chris Barnard, the characteristic that won me over and had the most significant impact on me was that through it all, through his trials and his failures and then his glory, his ‘human-ness’ shone through, his temperamental side, his sense of humour, his humility and daring nature and his mischievous streak. I reckon he was a good guy, a really cool human being.

I will not elaborate any more on the details of our visit, because again I’ll urge you – go check it out for yourself. You won’t be disappointed.