I’d like to tell you the story of our exciting adventure tonight…. the culinary kind🍴🍽🥗🥄

It started when I announced we’d be going vegan 🌱 for the evening. This announcement was greeted with a barrage of protests, accusations of child neglect, and a threat to report me to child protection services 😃. Gotta love my minions – I guess the saying is true, “the apple(s) don’t fall far from the tree”. Absolutely true viz Attitude^2!

Anyway, despite the protests we prepared dinner, and guess what…. Not too shabby hey. Heck, I think it looked quite amazing 😉 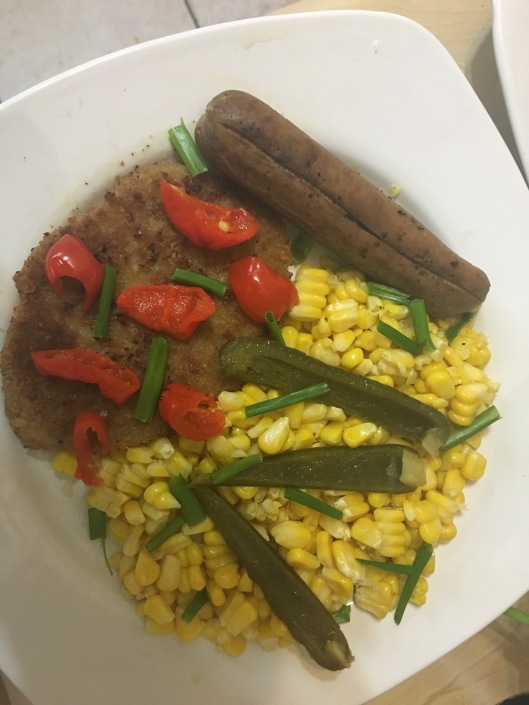 Indeed! It was tasty too. We might just do it again me thinks.

Some “food” (every pun intended) for thought – I felt like adding a side note because it’s in my nature to think critically about everything.

I’ve heard several claims that a vegan diet is healthier for you as person and it has less of a negative impact on the environment. So of course this is one of the chief reasons why I decided to try a vegan meal for myself.

While preparing the meal, I was thinking about the actual product (vegan schnitzels and sausages) and it occurred to me that these had to go through some manufacturing process before they ended up in the supermarket freezer and then in my kitchen… no? And I wondered if that process (as manufacturing processes often are) wasn’t perhaps even more harmful to the environment than a non-vegan food manufacturing process? Thus, could it be probable that the ultimate impact or outcome on the environment is even more negative? I don’t know…. It was getting late and the ‘feed me’ tummy rumblings emanating from the minions and I started becoming rather frightful, so I stopped thinking about it and just ate my yummy dinner.

The question remains though… but I’ll leave it for some passionate vegan M level student to resolve in the future.