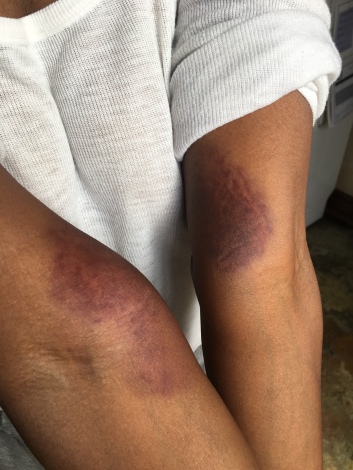 No this is not evidence of S&M or an abusive boyfriend! I’m rather chuffed about my purple bruising because it is in fact evidence of my long awaited archery lesson! This happens when you accidentally smack your bow arm with the string of the bow as you discharge the arrow. A novice mistake….. because I am a novice! #PayingMySchoolFees 🏹 🏹🏹🏹

I wish I had my own bow with arrows that I could practice every day! Fun cubed for sure. My dream is to be that chic with a bow and a quiver of arrows on my back or side – and while I’m dreaming I might as well add a unicorn to the dream so I can shoot my arrows on the go…. 🦄 😁

Seriously though, it was more than cool. It’s an expensive sport to get started with though. Approximately 10K to just get set up. One day when I have extra cash, I believe I’ll definitely do it. For now it’s time to start saving. A great huge big Thanks to Luther and Sharon at Bowtime in Brackenfell. I definitely will go back to practice again. 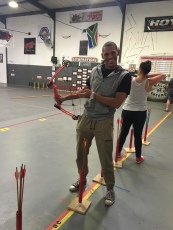 Still revelling from an epic experience, Mel and I invited ourselves over to Berty’s house for a braai, and then later the evening he persuaded us to pop in at his Local, where a fundraiser was happening to pay for one of his friend’s charity entry to the Two Oceans Marathon. To end off a rather cool day I won a raffle prize at the fundraiser event 🤸🏾‍♂️👏🏾🌈 -A bottle of black vodka…. never knew the product existed before. So it’s been a pretty cool weekend.

But for now it’s back to work…. gots to earn some cash…. to buy my own bow and arrow! Catch ya later alligator